Linux for Older PCs : From Ubuntu to Vector Linux

My linux journey began with Red Hat and Corel Linux, in the 90s. For a long time, I just couldn't convince my dad to install linux on his windows laptop, the only computer we had then. Then came the 21st century, with linux distros getting more user-friendly with easier and manual-free installations. I shifted from being a long time RedHat Fedora fanboy to an interim PCLinuxOS fan to finally an Ubuntu believer.

Finally after 2 long years, this week, I decided to move on a bit, and try something new. My PC is getting older and constantly struggles to carry the huge processing needs for the latest KDE4 or Gnome and the delicious compiz, which has now become an integral part of the entire Linux Experience.

This week, I tried Vector Linux, a slackware based distro, known to be fast and stable, ideal for older machines like mine and yet never compromising on the features. Read on, to see if it delivered what it promised.


Before we start, here is my PC configuration. It's an old Compax nx7010 business laptop with a Pentium M(Centrino) 1.6 Ghz processor, 1.5GB of Ram and a 64 MB ATI Radeon 9200 gfx card. It's pretty fancy for a 5 year old laptop, but it cost a bomb back then.

I downloaded the VL 5.9 Standard Edition iso from the Vector Linux Homepage and gave it a try.


1. Installation
VL has a decently friendly text-based installer. I found it easy at most times but the partition tool still needs some rework. If you are not comfortable using fdisk or similar text based partition utilities, I would suggest creating the swap and root partitions beforehand using gparted or something else, and just select them for installation. It is a lot easier this way.
The installation was really really fast, finished in less that 20 minutes. Lilo autodetects other OSs on your system and configures easily. VL also prompts you to configure xorg and suggests drivers for your card. In my case, fglrx doesn't work for older ATI cards (pre Radeon 9550), so I selected the opensource radeon drivers. You can also configure your network settings. The system reboots to boot into your new VL environment.

2.Interface, design and usability
VL uses Xfce as it's default desktop/window manager. It also comes with jvm, fluxbox and other light alternatives. The default Xfce environment looks really polished with Thunar being the default file manager. 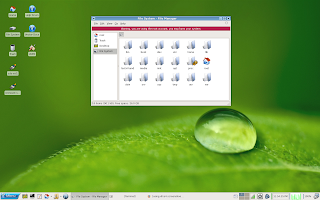 It's nice to log in as Root for a change, though it is never recommended. On top of the standard xfce applications set, VL offers its own control center called VASM where you can configure - display, network, boot systems etc. 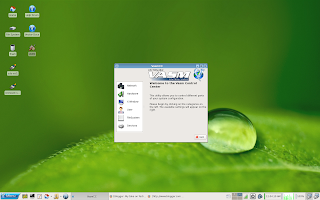 Another nice addition is the package manager GSLAPT, which looks like a skinnier half brother of synaptic but has everything you will ever need to install the extra packages. 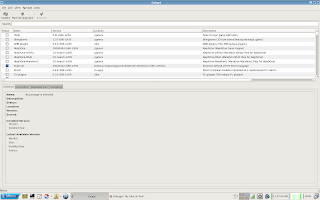 Overall, for newbees it's a pretty friendly experience, and seasonal Xfce users will be delighted with the VASM and SLAPT.

2.Quirks, Pains and Woes
I am really tempted to recommend it to everyone, but no OS is perfect, including VL. Firstly, I wasn't really impressed with the partition tool in the installer. Secondly, newbees who select the wrong graphics driver will be left wondering why their Xorg crashes with "no screen found" each and every time they do "startx". Thirdly, the built in wifi configuration in VASM refused to obtain an IP address from my d-link router. VL comes with Wifi-Radar, which again gave the same message. I finally had to get Kdenetwork manager, just to get my wifi connected. Users from other distros - Ubuntu, Suse, Fedora etc. will definitely miss the extensive package support in Vector Linux, which currently has a limited package repository. There are some articles online, which talk about using Slackware packages directly on VL, which I still need to read. Overall some hits and some misses.

3. Final verdict
Once all the initial quirks are resolved (especially the xorg issue), VL is a really solid distro. It is fast as expected from Xfce.
For older machines, fluxbox is a really nice alternative. VL packs a wbar, a mac like dock on startup, which can be activated for Xfce with following command. 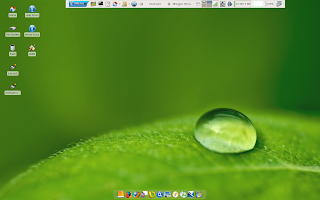 The best way to really speed up things is by choosing a lower desktop resolution. It really works but would you wish to give up your crisp high resolution for a faded 16 bit low res? The choice is yours, speed vs looks. And yeah, forget compiz. The last one really hurt.. right? Enjoy your linux experience, and please do give VL a try. I am off to try Mandriva 2009 RC2, but I have a gut feeling, I will be back again to VL. Have a nice weekend folks!

A few days back, Ubuntu announced the release of the alpha6 of the next Ubuntu release, titled as Intrepid Ibex. Along with a new version of the kernel and X.org server, it has some useful improvements. Here is a sneak peak of what to expect from the next release.

A gentle reminder, please don't try this on a production Environment.
Now, let us get started shall we.
Fire up your update manager, from System > Administration > Update manager or 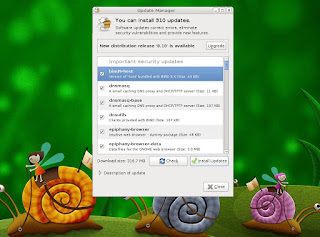 Update manager will ..prompt the availability of 8.10 in the repos. Click on "Upgrade". 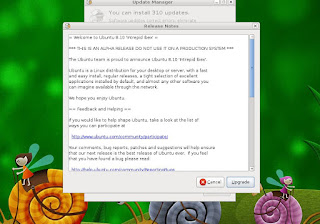 Sit back and relax, as the update starts. Restart the machine to complete installation and Voila, the new system is ready for testing. 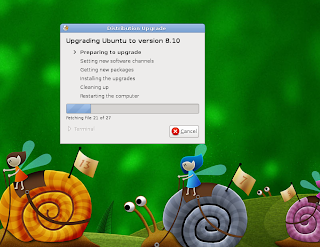 Great, now let us look at some of the new improvements that Ibex has to offer. 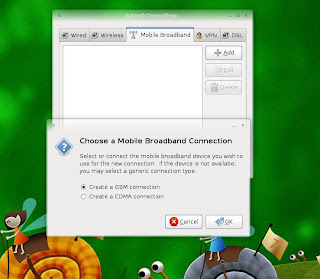 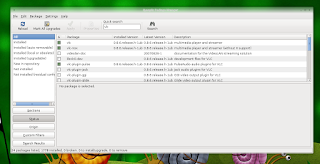 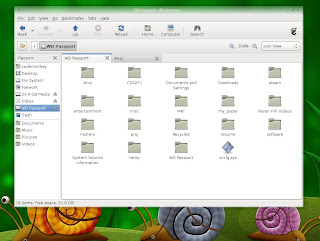 Ubuntu now offers your own personal protected (chmod 700) and encrypted folders under ~/Private. In alpha execute the following to get this feature.

5. Guest Accounts
Ibex will have a new "Guest" account. Guests have almost no rights. They have no access to other users’ files and they cannot save any files permanently (guest’s home directory is temporary). This is a nice security feature if you want to give your friends' a internet browsing access or for other simple tasks, without compromising your system's security.

Final Word,
From the regular end-users' perspective, the alpha6 has nothing ground breaking to offer. Most of the new features are good to have, but not a must to have. You see the difference right.I didn't encounter any major issues using the alpha, but if you have a stable 8.04 working on your box, I would suggest waiting for the final 8.10 release. But, if you are feeling a little adventurous, just like me, go one and give it a try. You won't regret it.
Enjoy the Ubuntu Experience and keep supporting the Open Source community. Thanks.

What have I been up to lately

This is another filler post. Blogging time is hard to come by these days, with a full time job which keeps me quite occupied throughout the week. Here is the list of posts that I am hoping to complete by this weekend.

Browsers get Speedier and the competition heats up...

This is more like a filler post as I hardly have time to blog on weekdays. This week had so many really interesting things happening in the tech world that I just couldn't help ..myself.

Google loves to hog the limelight and they did it again in great style by releasing "Chrome", the google branded web browser based on WebKit. Touted as the fastest and safest browser ever, with a new Javascript virtual machine called V8, and a multiprocess approach to individual tabs, Chrome is an amazing experience. I tested it on my office Vista machine, and it was clean, easy to use, light and really fast. First impression, an awesome "A". As firefox is blocked in office, and Chrome surprising installs without Vista prompting me for an Admin password, I can see how Chrome easily replaces ie7 for me in my workplace. 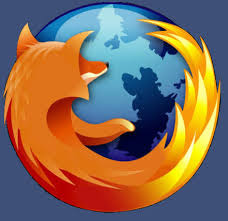 make things more interesting, Brendan from Mozilla posted results of their own new Javascript engine Tracemonkey for their next generation browser Firefox 3.1, on his blog, showing how it kicks chrome's butt in the SunSpider Benchmarks.
I did a quick test and found it really snappy and fast compared to the current Firefox 3. It's still an alpha so don't expect great things from it yet :).

The already saturated Browser market has yet another competitor, which surprisingly has the potential to outshine the leaders. But the fox is still not out of the race yet. M$'s got a lot of work to do now, if it still wants to keep up in the race.

I am still waiting for Chrome's native linux version. Or else, will have to use Wine to run it, but then that's for the weekend. Good Night everyone.