Back when I owned an iPhone, not too long ago, I stumbled across PlainText, a free app by the Writeroom team. It was a barebone minimalistic writing app which would sync with dropbox, enabling me to continue writing cross device and cross platform.
That's when I discovered art of minimalistic distraction free writing. All you get is a full screen of blank canvas. No intruding buttons, plethora of menu options or distracting bright colors. As a writer, you focus on simply transforming ideas into words.
When I moved to the Android platform, I was looking for a similar alternative.
I stumbled across Epistle, which worked really well. The only feature it had missing was the ability to manage folders within dropbox.

Recently, I discovered Epistle has been discontinued and the developer has released a new paid app called Draft which unlike Epistle, is actively developed and has fixed some of the gaps. The app is just ¥245 ($2.5) and I fully intend to purchase it and support the developer. However, before that let's quickly check out the free options currently out there.

1. Writer : A light, no frills app with very basic features.  Great for taking notes. No folder support. No native dropbox support, however it saves notes in separate txt files. And in theory you could sync it with dropbox and google drive. 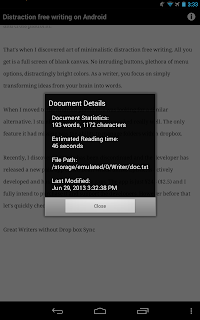 2. Light Paper (free): A fairly new app which looks quite promising, and offers tonnes of features. Connects to dropbox, tumblr and wordpress. Supports Markdown and spell check. However in my test on my Nexus 7, I found the free app quite buggy. The bottom ad is quite distracting, the on screen menu buttons did not work well, and it did not autosave my work. I hope the paid app works as promised. However, do give it a try. 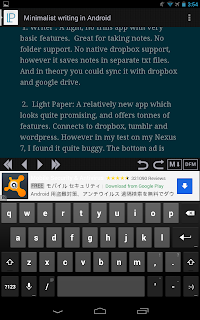 3. Write, in the cloud:  A less known app, which is my current app of choice. Similar to Epistle and Writer, it's a very simple app, with very basic features. During the first run, you specify the drop box folder and then there are no other options to configure. Everything you write gets autosaved. My only issue with the app was the lack of specifying font sizes. My eyes aren't getting any younger. Larger font would be nicer. Highly recommended if you aren't looking for a lot of features, and need a basic text editor that syncs with dropbox. 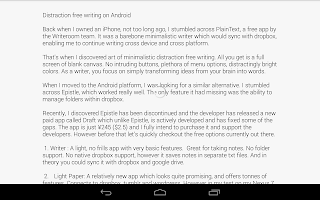 There are obviously a dozen more apps on the play store. Which app do you use? Do drop your comments below. And happy writing!

I have been using this app Candy Crush Saga Mod Apk : and downloaded and playing it regularly.