Metal Gear Solid 4 reinstates why being a PC Gamer sucks 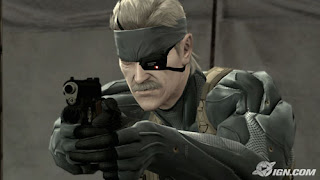 Last year games like CoD 4, Halo3, Crysis, Gears of War, BioShock etc. impressed us with their stunning gameplay and texture details. For the first time we saw Consoles churning out stunning games with amazing production value and rich cinematic experience. 2007 was definitely a year of the Xbox360 with so many high quality exclusive releases. But Sony hopes to redefine this in 2008. MGS4, a PS3 only release sets the bar higher and does it in great style. It showcases the amazing power of the PS3 and well, makes my life even more difficult...

Metal Gear Solid 4: Guns of the Patriots was the most anticipated game this year (along from GTA4) and it definitely has lived up to all the hype and expectations. The game received a 9.9/10 from IGN UK, a 9.5/10 from IGN AU, and a 10/10 from IGN. IGN was quoted in a video review, saying MGS4 is "one of the best games ever made".GameSpot gave it a perfect 10/10 saying "Metal Gear Solid 4: Guns of the Patriots is the most technically stunning video game ever made."

I know the X360 and PS3 camps are highly divided. Each group is proud of their exclusive titles. From an end user standpoint, I am still a little hesitant to buy one of these nex gen consoles. I can't wait to play Gears of War2 on Xbox live but don't want to miss out all the MGS4 and Grand Turismo action. And getting two consoles isn't a viable choice. PS3 has come back strongly and looking at the upcoming list of games, exclusivity is a trend that is here to stay for a long time.

All I can hope for is that Game studios don't forget us, the PC gaming enthusiasts and atleast port some of these titles for us. Till then the moral dilemma of which console to buy continues and hoping some day MGS4 comes to PCs.

Check out the video reviews below..

Email ThisBlogThis!Share to TwitterShare to FacebookShare to Pinterest
Labels: Gaming

At least you aren't trying to game with Linux!

But I feel your pain. I'm a student who can't afford to upgrade from my PS2 (and a Linux user), so I'm just waiting for the prices to drop on all these new consoles. I'm thinking about going for a 360 because then I can play NFL 2k5 for old XBox. But then I can't play MGS4 :( Oh well, I guess I'll go back to playing Sons of Liberty for the 100th time.

Gaming is the only reason why I still dual boot with XP :) I have tried wine, cedega and crossover but the newer ones fail miserably.
There are some really good games on Linux but they don't even come close to the commercial ones.

Someone should suggest Microsoft to offer student discounts for us.X360 prices are expected to drop soon. I might just get one soon. Time to start saving ;)