What the Flock! Flock Browser finally Shuts down 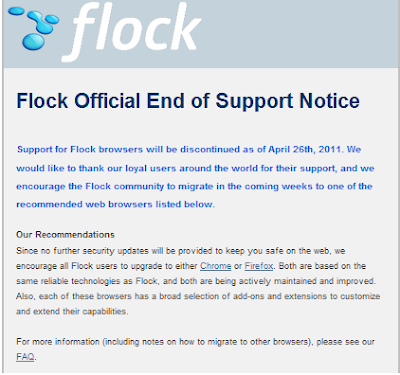 I was pleasantly surprised when I saw this email sitting in my inbox today. Flock was officially being shut down from April 26th 2011. The social interest in the niche browser had been dropping drastically and when Zynga acquired them for their developers in January, the end was almost sealed.

Personally, Flock was a neat idea. You got a firefox build (later chromium), which came with social features right out of the box. Sidebar access to twitter, facebook etc. Seamless access to your delicious bookmarks, email, blogging platforms..

Why did Flock fail?

Flock was way ahead of its time. As social media grew, there was a need to aggregate all your social graph, be it tweets, posts, votes, messaging into a seamless experience, right from your browser. In 2005, when the project launched, only the tech community, who understood the concept, helped create the initial hype and traction.

Fast forward 2010, entire world was talking about Rock Melt. People were scrambling for the invites. Honestly, Rock Melt had nothing new to offer. It was just pitched at the right time. Below is the google insight
view of the two competing browsers. Flock never took off but interestingly Rock Melt seems to be heading for a downward spiral as well.

In addition, the plugins which Flock relied on to fetch the social content had a slower update cycle. The full web experience of Twitter and Facebook had improved manifolds and mobile had took off faster than anything. Consumers became savvy enough to realize that they could selectively download plugins for firefox/chrome to get a similar, less bloated, most recent build of their favorite Browser.

Well, best of luck to the flock team. Hopefully they can achieve greater things at Zynga.
Posted by Anoj at Saturday, April 16, 2011

Email ThisBlogThis!Share to TwitterShare to FacebookShare to Pinterest
Labels: browser