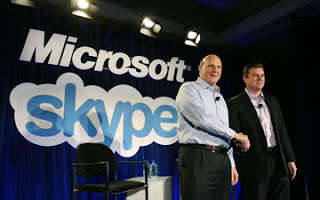 Merger economics teaches us that the fair value of a target firm is its market value plus "Synergy".  Last September when eBay sold 65% of its stake in Skype, the internet communication company was valued at $2.75 billion. Adding an additional $1 billion that Skype was planning to raise through an IPO, Skype should have been a $4 billion acquisition. Then why did Microsoft pay $8.5 billion? Is the post-acquisition synergy worth $4.5 billlion!

What's even more bewildering is the fact that last year Skype made a nett loss of $7 million on a total revenue of $860 million.  In Microsoft's defence, Skype is a great company to own. Its user base grew 40% last year and the brand is now synonymous to internet telephony. Microsoft instantly gets access to a web property that's as popular as Google, twitter and Facebook. Integrating Skype into both its consumer and enterprise products should create synergy enhancing online collaboration. Along with its Enterprise communication suite Lync, Skype should also work well with their Xbox and Windows Phone platforms.

From a cashflow perspective, Microsoft has over $50 billion oversees, bringing it back would entail US taxes. And historically Microsoft's reinvestment in internal R&D hasn't had great returns. Thus investing in the Luxembourg based Skype is a smart move. But, only if the price was right.

Whatever be the reasons, a $8.5 billion for Skype still does not make sense. One wonders if Balmer got carried away with his vendetta over Google and their initial bid for Skype.What do you think. Do leave your comments.
Posted by Anoj at Wednesday, May 18, 2011