Take 2: Upgrading from Feisty to Gutsy - Recovering from a failed upgrade

As mentioned in my previous post, my upgrade failed and I finally had to resort to the normal fresh and clean way of installing the new OS. This meant formating my previous broken distro, downloading the iso, and doing everything from scratch.


The first thing I obviously did was to take a backup of my home folders. Next either download and burn the iso to a bootable cd. I prefer the no-cd method (Will describe that in later weeks)
which involves copying couple of files into my /boot, modifying the grubmenu.lst file, and do a network installation from the singapore ubuntu mirror (Too lazy to burn a disk from the iso).


The entire process took less than an hour and was highly streamlined. It's not much different from the Feisty installation and experienced as well as new users will find it right at home, with this distribution.


There is another issue at a point where it asks you to select the packages - lamp, xubuntu, kubuntu, multimedia & studio, etc. Some of the packages were missing in the mirror so its safer to just select the ubuntu-desktop now and install the rest later. 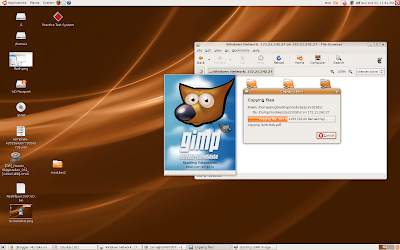 The shiny new, stable Gutsy with all the cool new upgrades and support for all restricted packages and device drivers ;)

BottomLine: I tried hard to downgrade to feisty and upgrade back to gutsy, but it's more complicated than it seems and it's definitely not worth the effort spent. Rather do a fresh installation as I mentioned above. If you are happy with your Feisty and aren't tempted by the gutsy phenomenon, I suggest waiting for few more weeks, so that the upgrade bugs can be resolved and all packages are properly mirrored back to your favorite servers.